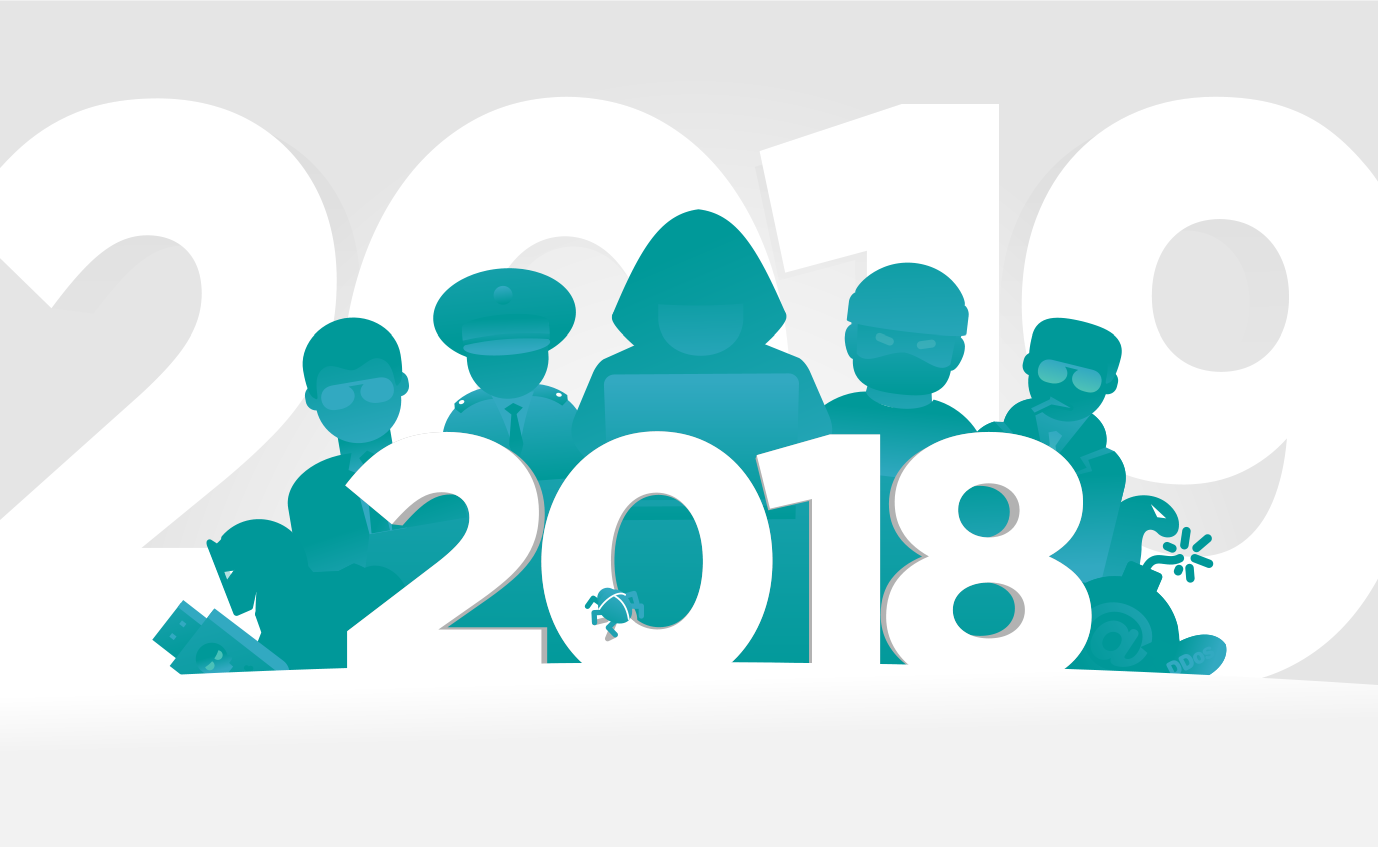 This report will cover the top trends and metrics that EclecticIQ Fusion Center analysts identified in 2018. This report is not meant to be an exhaustive account of every incident and threat in 2018, but will serve as a high level overview to identify what the Fusion Center considers to be note worthy from 2018.

Analysts identified several reports predicting trends into 2018 based on what was seen in 2017. This report will also identify where those predictions got it right. An additional section will cover predictions into 2019.

This report will feature a high level overview of trends and metrics seen in 2018. During the course of this report, analysts looked at three vendor reports from 2017 that featured trends from 2016 - 2017 and their predictions for 2018. These three reports ( Booz Allen , FireEye , and Forbes ) will act as a guide to help identify what vendors believed were to be the focal threat topics in 2017 and some of their predictions for 2018.

This report will cover the following:

Analysts looked at three vendor reports from 2017. The reports featured threats seen in 2017 and attempted to predict activity that might be seen in 2018. From these reports, analysts identified where some of these predictions were accurate, and provided additional insights into activity seen in 2018.

Here are some topics the three vendor reports focused on as being threats and trends for 2018:

EclecticIQ Fusion Center analysts have identified several links between APT33 and APT34 suggesting possible collusion. In the past, APT33 and APT34 has targeted a lot of organizations in critical infrastructure in the Middle East. Most of the techniques and campaigns previously seen represent opportunities for intelligence collection and reconnaissance. In addition, there could be an alternative use of those intrusions or accesses as possible means for disruption and destruction, especially given the destructive incidents we’ve already seen with other Iranian actors.

Analysts suspect that APT33 and APT34 will continue to be active throughout 2019 using low-barrier exploits in phishing activities. Analysts also suspect that the targeting of critical infrastructure systems and companies will remain relatively the same, but targeting may move to more strategic targets given the attention on Iran sanctions from the West.

In general, there has been a steady uptick in activity by Iranian threat actors in 2017 and in 2018. The only group from the list above that appears to be less active in 2018 than in 2017 was APT35. This is interesting given that APT35 is an Iranian cyber espionage group attributed and related to destructive attacks: Shamoon and Stonedrill. However, the lack of activity from this group may be due to the fact that they have been involved and attributed to rather large and resource-intensive attacks and malware campaigns in the past.

APT32 is a Vietnamese group seen in 2017 and 2018 known to target Southeast Asian entities in Vietnam, Cambodia, and Laos. With the growing awareness and infrastructure expansions of China's BRI (Belt and Road Initiative), Vietnam’s ambivalent reaction to the BRI may lead us to speculate a potential increase in cyber activity from this group due to the complicated economic and strategic relationship between the two countries. No uptick in activity confirming this speculation has been seen at this time.

Additional groups that EclecticIQ Fusion Center analysts consider as prominent or having continued campaigns in 2018 include:

This was a topic mentioned in the vendor reports as a large threat for 2018. By infiltrating software that is used in larger supply chains, adversaries can compromise several enterprise networks simultaneously. Instead of buying or leasing infrastructure, threat actors may compromise legitimate infrastructure and use it for parts or all of their attack cycle.

The following are large incidents from 2018 that analysts identified as falling under these parameters:

Attacks on these systems can cause delays in production, physical damage, and can jeopardize the safety of employees and customers. This year, analysts have observed some trends regarding malware and attacks against ICS. Two ICS malware campaigns are worth mentioning under this section:

Top 3 types of malware which analysts from the Fusion Center have identified by volume seen in 2018 include:

One of the vendor reports discussed projected trends into 2018 and identified that commodity malware will continue to be distributed. Analysts note that Malware: GandCrab (just like other commodity malware) will usually affect organization and individuals with no or poor security practices.

It is also important to note that in 2017, cryptocurrency miners were heavily discussed as a large issue as they were very resource-heavy for many companies to endure. While this was not the most dangerous threat in 2017, it was very prolific and was expected as demand in cryptocurrency (especially Bitcoin) increased.

For 2018, analysts identified that cryptomining malware was still popular, whether it was being dropped by commodity malware or being used by certain groups to self-finance their operations. However, due to the emergence of browser applications and tools to identify mining processes running, this threat has appeared to move toward the status of most commodity malware. It is still a threat, but people are more educated now than they were in 2017.

Analysts identified the most reoccurring attack vectors / attack patterns used by groups in 2018.

The above attack patterns are expected since adversaries relying on low-barrier phishing attacks can make use of a Microsoft Office vulnerability, often enabling malicious macros after clicking on an embedded link and executed by the victim. One of the vendor reports predicted phishing activity as a notable attack vector for 2018, and the above attack patterns would confirm this.

MITRE ATT&CK Framework Attack Patterns related to Malware TTPs that were most represented in 2018:

Aside from the predictions around the Iranian based intrusion sets discussed above, here are some additional predictions for 2019:

Analysts chose the three different vendor reports (discussed above) as a way to gauge what predictions from 2017 were true, and to see what predictions may have deviated to what was actually seen in 2018. The uptick in Iranian APT activity, 3rd party and supply chain compromises, phishing as a low-barrier attack vector, and the continued use of commodity malware were the most overlapping trends and predictions that all three reports shared.

Analysts will continue to monitor trends and patterns into the coming year. Until then, we would like to wish you a happy and secure 2019!