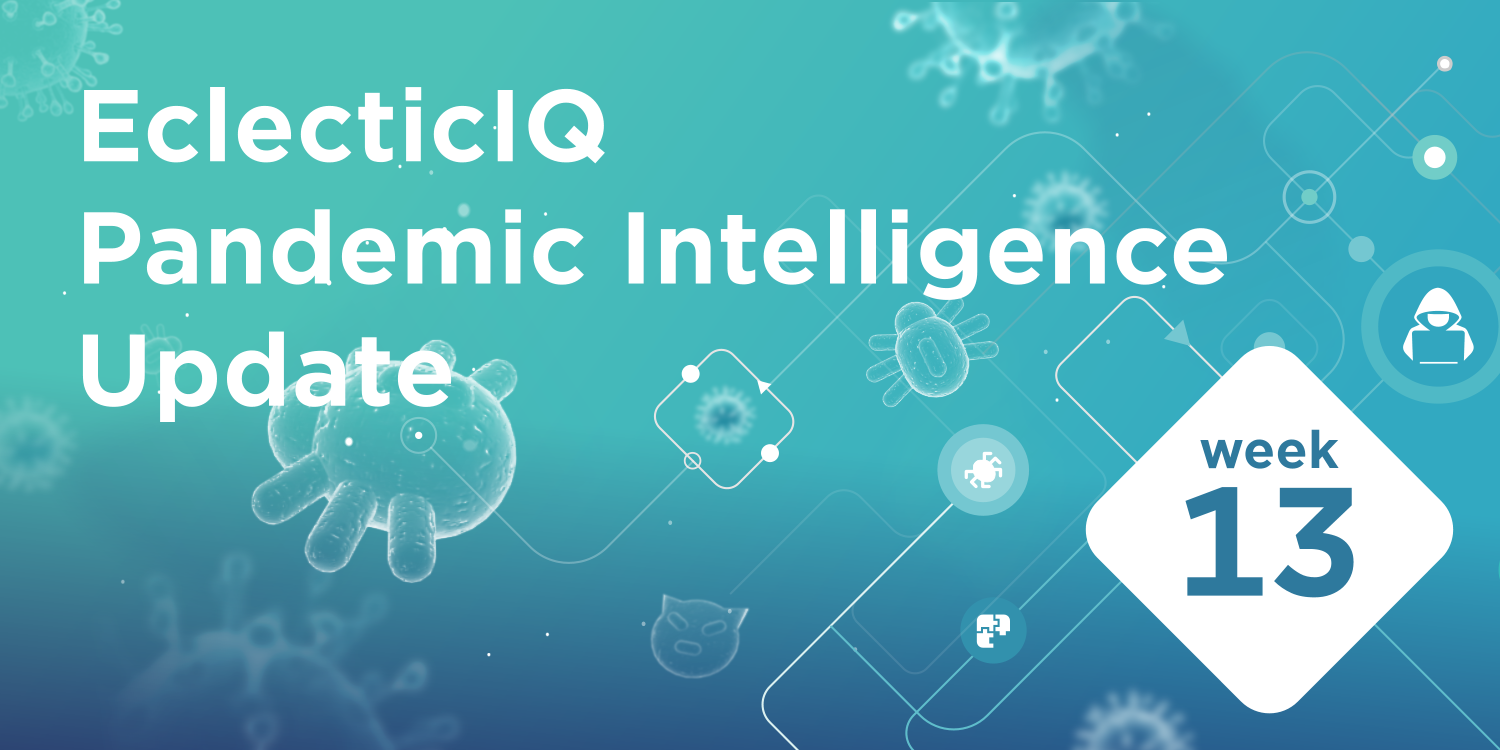 This is the first report in a weekly series of updates to inform of important developments to COVID-19-themed attacks. EclecticIQ believes these attacks are particularly effective due to current events. The information presented in this report will assist organizations in focusing their security resources better, during a time when these may be limited, and impact may be high.

In general, analysts observe threat actors developing TTPs with increasing ingenuity and deploying them in attacks that specifically exploit COVID-19 panic. Threat actors are using general commodity malware, which is less sophisticated, but the new stage of attacks is characterized by more advanced TTPs: multi-stage infections, well-obfuscated payloads, and designs to misdirect analysis. Fake information is also now building to significant levels that will enable further attacks and increase their efficacy from the deliberate confusion. Studies show that increased anxiety is directly linked to poor decision-making.

The attack features a spearphishing email that leads to an infection with Plug-X malware for information stealing operations yet-to-be-identified. The attack reported uses more complex TTPs in the Kill Chain and the payload is well obfuscated during much of the exploitation phase. This attack is likely to be much more effective against Security defenses compared to other attacks analysts have seen to date with COVID-19 exploitation themes.

The article suggests that the activity is attributed APT27, arguing that “PlugX is a well known RAT attributed to China’s APT” and that the “hijacking method are a mandatory knowledge for a job like pentesting [in China].”

EclecticIQ analysts do not share this assessment. PlugX is a publicly available remote access trojan that has been used by other intrusion sets in the past (https://logrhythm.com/blog/deep-dive-into-plugx-malware/, https://blogs.jpcert.or.jp/en/2017/04/redleaves---malware-based-on-open-source-rat.html). Attributing its use to a single intrusion set is not reliable. Furthermore, knowledge about hijacking and whether it is mandatory for a pen-testing job in China is not substantial evidence for an attribution to a Chinese APT.

It is plausible that the campaign was executed by cybercriminals. Analysts observed similar general remote access staging activities taking place with many of the early Coronavirus phishing attacks (Cororna report citation). Much of that activity was directed with Emotet.

The U.S. Health and Human Services Department was hit by a DDoS attack

The hospital recognized an attempted DDoS attack against its network. Concurrently, the same threat actors issued a fake message via text, email, and Social Media enflaming COVID-19 panic regarding lockdowns. The attack was likely operated by a younger common threat actor looking to create disorder. The clear intent to cause chaos and the weak DDoS attempt without exercising any objectives of real value, points to a person with low maturity.

Just prior to a major update announcement in Australia, threat actors sent a fake message purporting a major lockdown was going into effect. It's unclear how the message initially gained traction, but it does not appear to have originated from a hijacked account or a spoofed account. It was likely amplified using a botnet to quickly distribute the message to a large group of initial victims. The fake message caused confusion for Australians and regional neighbours throughout the week.

An attack observed this week used a persuasive, well-crafted global infection map. Antivirus detection on payloads dropped from the map site include the AZORult info-stealer; another MaaS (Malware-as-a-Service) family.

The use of commodity malware like AZORult makes this attack less effective and suggests threat actors of less maturity. Antivirus products are able to detect commodity malware more easily because there have been more samples to fingerprint against. The use of the map graphic represents a more complex TTP used in these attacks. This type of weaponization ingenuity is the result of more threat actors participating in COVID-19-themed attacks.

This activity is accelerating rapidly as domains and malware exploiting COVID-19 are increasing (https://blog.checkpoint.com/2020/03/19/covid-19-impact-as-retailers-close-their-doors-hackers-open-for-business/). An updated feed of newer, likely-malicious COVID-19 domains can be found here for investigation purposes in your threat intelligence platform.

The trend of COVID-19 malware spreading is further supported by the following reports:

EclecticIQ analysts observed Emotet variants using similar TTPs to bypass spam filters, except they were stuffing material from impeachment related articles into the metadata fields. This indicates that the crypters (software used to encrypt and obfuscate malware) used in these TTPs are effective at increasing delivery rates. In both cases, the crypters used information from high-interest, recently published media articles.

Observing different payloads coupled with common attack pattern TTPs is an indication of participation from lower-skilled threat actors seeking to capitalize on the low-hanging-fruit that the COVID-19 presents. Attack rates appear to be increasing currently and as the situation escalates, so will the TTPs.

A limited subset of the activity appears to be highly politically motivated, which may indicate limited APT involvement, but the majority of the activity is aimed at common patterns of disinformation, which analysts are accustomed to seeing at this point. The disinformation does not appear to be directed at a specific future attack and is likely the result of many threat actors participating, but not necessarily cooperating.

It is important to continue to clarify and specify official information channels so that employees are less susceptible to bad information.